From Lourdes we headed for Madrid, where World Youth Day was held this year. Such a beautiful train ride through the Spanish countryside and Pyrenees mountains. I even saw a man whom I fondly dubbed Zorro: I glanced out the window and there he was, riding a black stallion, his white blouse and long hair whipping in the wind...be still, my heart.

It was another long trip, with a short delay. We made it into the city around 9:30pm, with a considerable amount of confusion as to where we were registered to stay. Thankfully, an elderly Spanish couple walked 5 blocks with us until we reached a WYD representative, who walked another 3 blocks with us. Precious angels. We subsequently had a slumber party with some Oklahoma Sooners and Ugandans on the lovely concrete bed of a high school parking lot.

On Saturday, we had time to kill until the 8:30pm vigil with the Pope. We walked around a gorgeous park, where we ran into and volunteered with the Missionaries of Charity. Had a delicious lunch of sandwiches and paella, and headed for the Prada art museum. Ran into Carly King & her lovely Longhorn friend Randy (not once, but twice!) and accidentally abandoned Stephanie and Ariana when we left for the cathedral and palace...oops. 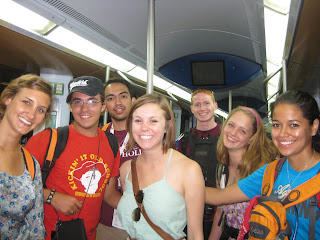 Aggie Catholics, minus me and Stephanie

Had a fighting Texas Aggie Catholic reunion + the lone Longhorn, WHOOP! A reunion which made us 5 minutes late for the 8:30 vigil with the Pope...and accesses were closed :( We camped out in front of an apartment complex across from Cuatro Vientos, the airport where the vigil and the morning Mass were to be held. The sky began to threaten serious rain and lightning. On the first floor of the apartment complex, a woman was hanging an Ecuadorian flag out of her window. Paul asked her to please buzz us in, just to wait out the storm in the hallway of the complex. Not only does she let us in the hallway, but the beautiful family invites us into their home! They fed us melon, popcorn, turned on the live broadcast of the vigil, and we watched and adored Jesus from 500 feet away.

I can't begin to describe how emotional we were that the family to have welcomed all 9 of us into their home, where 7 of us stayed for the night. To experience such love and hospitality from total strangers! In a way, it was far more special than had we made it into the audience with the Pope.
Posted by carolyn12 at 7:35 AM