Orvieto, a town situated on nearly-vertical volcanic cliffs, with an underground labyrinth of man-made caves. Sweet! 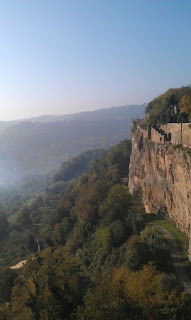 Also home to a humungo Italian Gothic cathedral, which was built to house a miraculous relic. What was the miracle? In the 1200's, there was a German priest who doubted that the bread used in communion is really the body of Christ. During Mass, blood started to seep from the Host and trickle over his hands onto the altar and stained the corporal (a piece of cloth laid on the altar). The corporal is still enshrined in the Cathedral of Orvieto. Maybe some don't understand, or believe, but the blood-stained corporal is in a side chapel for all to see.

The Cathedral, my favorite facade by far. So many details and intricacies...it's meant to look like a tryptic. 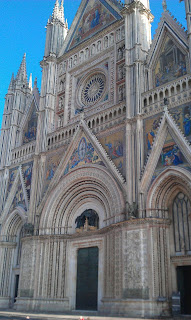 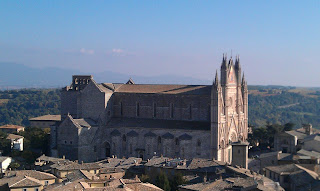 Underground caves, with evidence of the city's founders–the Etruscans. 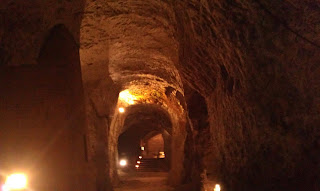