Does anybody speak English? Anybody?

The Friday after Paul and Stephanie left to return to the States, I began my very first independent journey to the town of Barth, Germany, where my mom's dad was held as a POW. There I was to meet a woman named Helga, who has single-handedly kept the memory of the POW and concentration camps in Barth alive.

Yes, it was going to be a long day of trains and transfers: leaving Landstuhl at 07:02, I was not due in Barth until 16:44. I was a little nervous to travel alone, but after backpacking I was comfortable enough with the train system. In Hamburg, I was on my second to last leg–another 3 hours and then I would meet the Helga I had heard so much about from my mother and grandfather.

I stretched out and put my feet up on the seat in front of me. Two older women sat in the seats next to me, though we were separated by the aisle. One who seemed to have a permanently grumpy countenance looks over at me, says something in German and points to my feet. It is either, “I like your shoes,” or “Take your shoes off the seat. People sit there.” I smile stupidly and refrain from stretching out. I am honestly too excited to sleep, anyway.

Around 15:30, the train comes to a stop. Typical, except this one seems to be lasting longer than normal. I notice after an announcement is made (no English translation in this east German rural train) that my companions look a little annoyed. “Spekken du English?” I ask meekly the lady who fussed at me. “Nein,” she replies, but she quickly finds another woman who speaks a little. “The train is delayed for 2 hours.” The one whom I deemed grumpy and her friend stand up to leave the car, but stop and motion for me to get coffee with them in the bordbistro.

The “two-hour delay” turned into a solid four-hour delay. Another train headed to Rostock was also unable to move forward, and in Shwerin those of us headed to Velgast piled into the Rostock train. The four hours involved many announcements, free coffee, and several promises of moving forward in the next forty minutes. The two women, the "grumpy" one and her friend, (I fondly refer to as my German mothers) really took me under their wings. Each time an announcement was made, they would point to their watches and indicate how much longer we were to wait. They even found for me a Bahn worker who in very good English was better able to explain what was going on to the confused little American girl.

During all the waiting, the inconvenience, the confusion, I think it almost is appropriate to have undergone a little discomfort when I consider what my grandfather’s first trip to Barth was like. I interviewed Grandpa in high school for WWII project and began to have an understanding of his experiences as a POW:

“[We] were packed into these things, the capacity I mentioned was 40, and they packed 53 to 55 of us in each car. So there was no room. You couldn’t sit down, well, everybody couldn’t sit down at the same time, so half had to sit and half had to stand. And obviously you couldn’t lay down and rest at night, and as we were leaving there they had two gallon buckets to take care of biological needs...And water was the worst thing that we were lacking. As a matter of fact, I would rather, if I had to die, I would rather die from hunger than from thirst because thirst is one of the most maddening experiences you can have. And it was so maddening it got to a point–this experience is running into days now, we’re talking about 120 mile lasted 8 days– so the maddening about having water, by then it was Jan and it was snowing at night, so we’d–the cars were wooden– tear slats from the top of the car and run our hands out and cup them to catch the melting snow after daylight. And we’d take turns doing that...but it took time, and I didn’t think I could really be living through this thing.”

Yeah, I think I can stand a little more waiting than I had anticipated.

Thankfully, my hosts in Landstuhl leant me a cell phone from which I was able to contact both Helga and the Hotel Speicher where I was to stay. The phone calls mostly consisted of me saying, “I don’t know when we are going to move forward, or where we are going to stop.” Eventually, we did move forward. The English-speaking conductor found me and explained as best she could that we would not be going to Velgast (it would be pointless anyway, because at this hour the trains to Barth would no longer be running), the train would stop somewhere else, and a paid-for taxi service would take me from Somewhere Else to Barth. 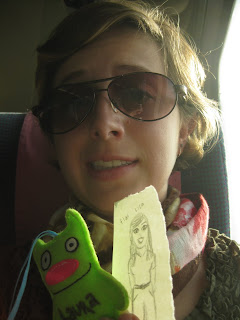 My German mothers usher me off the train and point me in the direction of the taxi. There are 7 other passengers in the large shuttle, 2 of which are going to Barth. I squeeze into the very back of the shuttle and meekly ask, “Does anybody speak English?...Anybody?” to which there is no response–I am in Close-to-Nowhere, east Germany, after all.Thankfully, I arrived at the Hotel Speicher at 22:30. Waiting for me was a delicious sandwich with a little American flag toothpick, and a bed in which I quickly plopped into for a wonderful night’s rest–the Baltic air cooling my room. 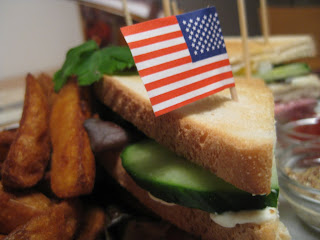 “In all [those] months, I never slept on anything but the floor. They were overcrowded and the worst part was lack of food...They had these little supplementary packages. If you added that to the soup the Germans would give us, you could survive on that. But you wouldn’t last very long, because the soup we got was maybe 500 calories total.” -my Grandpa, Don Menard