Running on just a few hours of sleep, we walked the 200 feet to the gate in hopes to be let in around 4am. Not so much. After four hours, with people pressing close and becoming rather testy, we were told that due to overcrowding, people were not going to be let in.

We resigned ourselves to the disappointing fate and parked on a hill outside the airport. Maybe, just maybe, they might still let us in...

...and they did! At 9:30am, just shortly after the Holy Father's arrival to Cuatro Vientos, they opened the gates!!! It was a beautiful victory, one which inspired me to hold the Aggie flag high. 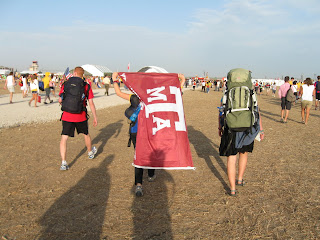 And approximately at 9:35am, as the five of us marched triumphantly down the runway, I hear to my right, "Carolyn??!!" In a crowd of 1.5 million, I ran into one of my dearest friends Jenny from middle & high school, along with Marco and Becca! Can you believe it?? God is so good! 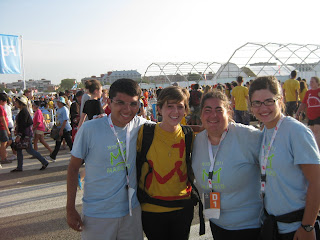 We had a beautiful Mass with the Holy Father, Pope Benedict XVI. With the help of our Ecuadorian friends, God be praised, we made it through the insane crowds in the metro to the airport, survived a rather turbulent RyanAir flight, and even a rather turbulent shuttle ride back to our "home" in Landstuhl...whereupon our arrival, we chowed down on the food Paul's precious parents set out for us, and laughed deliriously at all of our adventures. 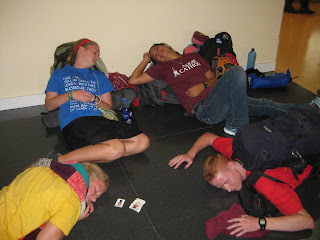