The next morning, I enjoy a smorgasbord of sausage, cheese, bread, then met Helga in the lobby. She greets me with the warmest welcome I have ever received: a big hug, a kiss, chocolates, a German book, a piece of amber ("It is a talisman!"), and a bouquet of roses. We hop onto our bicycles and I see Barth in the daylight, with a local townswoman as my tour guide.

“Here now is the original road that the soldiers marched on. You see?” I think of Grandpa, barely 18 years old, and probably scared as hell not knowing what was to come. “War. What a waste of youth,” says Helga. We pass a group of bikers going the opposite way, a chorus of “gut morgen’s.” Our first stop is at the memorial stone for Stalag Luft I. As Helga fingers the panels, I begin to have a better understanding of the layout of the camp. “Now, we go to Nord III.” 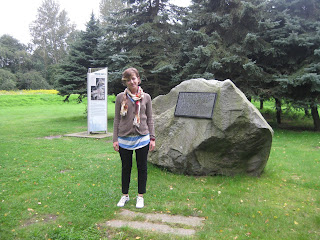 After parking our bikes, we stand in silence. Immediately I am struck by the beautiful silence of the woods and the wheat field. “It’s peaceful,” I say, and Helga agrees. I feel a sense of gratefulness, especially one of privilege, and even joy. “Now you can show Don your pictures and tell him you were here. He will be so happy.” 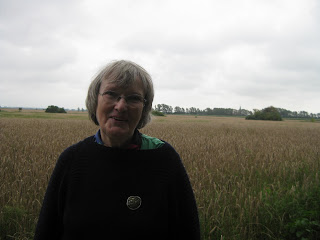 Helga with "Nord III" in the background

We make our way back into town, past the train station where Grandpa feared the most for his life as the townswomen attacked the soldiers, through the original gate where they marched, to the little museum where Helga’s office is. She translates each and every panel for me; she gives me a better understanding of Barth and its people in WWII. Seeing the detailed model of the camp, hearing the various excerpts, and I can almost close my eyes and see it. And I absolutely LOVE watching Helga as she thumbs through papers, photos, and correspondences–this is truly her vocation! I ask her about her inspiration for her 20 years of research. She explains how at five years old, her life was saved by a Yugoslavian liberator. Keeping the memory of the POW and concentration camps is one way for her to honor that. 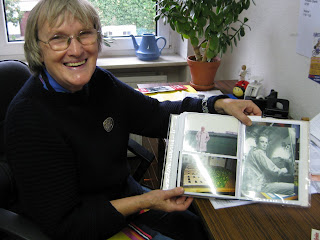 precious Helga with pics of Grandpa, then and now. isn't he handsome??

Helga digs through one binder full of some sepia toned papers and black and white photographs. “Your grandfather and some of the other prisoners asked me to find out what happened to the family that died...did you hear about this?” I shake my head no. “Oh, Carolyn. It’s awful. Look at this.” She shows me two photographs which will haunt me forever, depicting a scene which I now know has haunted my grandfather. In the first, a woman and a little boy's legs (he is out of the frame) lie dead in the grass, a baby carriage nearby. The other, the baby and its head and pillow stained with blood. Once liberated and free to roam a bit, this terrible, terrible site is what some of the POWs stumbled upon. The woman was the wife of an SS officer, who gave her a revolver to kill herself and the children should the Russians invade. How do we as humans deal with this kind of stuff? “This is awful,” I say as I hand her back the picture of the baby–as if the word “awful” can even do justice to describe it. She sighs deeply, “Yes. It is war.”

We enjoy a simple lunch at Hotel Stadt: a light fish soup, and lighthearted conversation. As we put our coats on, Helga sighs again. I am sure I have tired her out, much of the content at the museum was heavy. “So. You really want to go the KZ?” (KZ is an abbreviation for a concentration camp). It’s not even a question–yes, I want to. We bike rather somberly. We pass a street sign, Weg des Kreuzes (Way of the Cross), and she motions for me to ride alongside her. “Let me tell you a story. On this street, there was a tailor who was murdered. You see, he often kept buttons in his pocket. One night at a bar, another man mistook the bulging, jingling pocket as one full of money. Following him home, the man stabbed the tailor on the street–only to realize he killed a man for his buttons.”

The memorial comes into view. Parking our bikes, Helga motions for me to read the single panel that stands near the road. “You see this picture? It was the original memorial set up. It acknowledges the 180 found dead here. But it doesn’t even mention that it was a concentration camp.” We walk a little gravel pathway to the little plaza. It is remarkably unkempt, uncared for, with weeds growing up through the sidewalk and litter scattered about. Up the few steps and the concrete is patterned with the upside down triangle: the shape of the patch that “political enemies” wore. A tower stands to the left, red triangles pattern it and it is missing the bell that was promised at its construction. A wall with four sculptures mounted upon it; the concrete of the wall is imprinted with wood, signifying the barracks, and barbed wire. The piece in its entirety is quite powerful and far from cliche. Helga tells me their respective titles: “Torture,” “Solidarity,” “Collaboration,” and “Liberation.” To the right of the wall are 6 tombstone-like plaques with inscriptions. They are identical, though written in different languages, representing the variety spoken in the camp.

Helga points out more trash lying in the surrounding woods. “This is a place where kids come to drink.” She also beckons me closer to the plaques, to see the chisel marks around the edges. “In 2000, we had an incident. Some kids spray painted over the plaques. Swastikas. They also wrote: ‘Don’t honor the dirty Jews. Honor the brave Germans.’” Fittingly in this very moment, the gray sky begins to send down a mournful rain.

The two of us take shelter under the tower. I know in this moment I am meant to just listen to Helga, because she is compelled to talk. “When Hans and I went to Israel, the daughter of a survivor begged us, ‘Tell me, how can it have happened?’ And we have no answer. For me, it is not understandable. But the thing is, it happened, and it can happen again.” She tells me about two memorial services held for the KZ camp survivors; one moved her especially. “It was a moment I will never forget. There are moments that you can never forget; they are burned into your heart. Like this moment with you! Under a tower with a hole, and without a bell.”

We embraced, the rain ceased, and we emerged from our little shelter to go eat coffee and cake. I had the good fortune to meet Hans, and their beautiful daughter. We eventually said goodnight, and I enjoyed an undeserved multiple-course dinner at the hotel. My head swam and my heart ached from the emotions of the day as I ate in solitude. I looked at my food and wine and thought about the men and women who went hungry and suffered terribly just a few miles from where I sat.

In the morning, Helga greeted me with yet another keepsake and homemade cookies “in case the train stops again!” She waited a half hour with me until the train pulled away from the station. Waving goodbye to her, I couldn’t help the tears that ran down my cheeks. 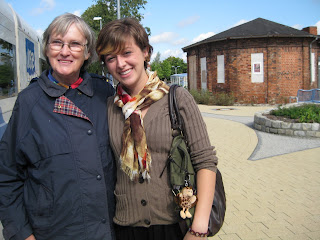 One day with Helga was not enough! I was so, so impressed by her life, her work, and her passion. Learning from about the camps gave me such an increased appreciation for life and the many blessings that God bestows upon us. Yes, even when it seems he is not there. What is that question we all ask ourselves–"How can a God who reveals himself as Love itself let this happen?" The answer for me came in the rain that seemed to indicate his sorrow; he is there through it all, he suffered and still suffers intensely with the victims of war and hatred and violence–and he suffers with us as we bear our Crosses too. I swore to myself that I would come back to Barth, and I will.
Posted by carolyn12 at 2:05 PM